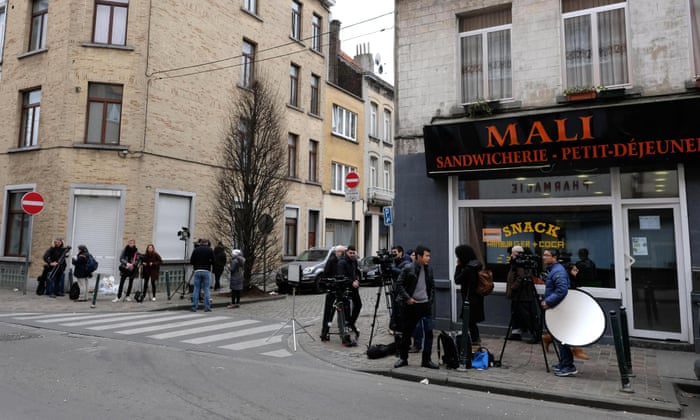 Salah Abdeslam, a prime suspect in November’s Paris terrorist attacks, had been planning to target Brussels, Belgian authorities have said, as his arrest on Friday has shifted the focus of the investigation to two other suspects considered armed and dangerous and who are still on the run despite a four-month international manhunt.

Abdeslam, who fled Paris after the attacks, is in prison in Belgium charged with terrorism offences after he was finally cornered by police in his home area of Molenbeek in Brussels on Friday. He will be transferred to France within the next few months.

The Belgian foreign minister, Didier Reynders, said on Sunday that Abdeslam had told investigators he was planning a fresh attack in the country’s capital. “He was ready to restart something in Brussels, and it may be the reality because we have found a lot of weapons, heavy weapons, in the first investigations and we have found a new network around him in Brussels,” Reynders said.

The scale of the wider network involved in the Paris attacks that killed 130 people is thought to be vast.“We are sure that for the moment we have found more than 30 people involved in the terrorist attacks in Paris, but we are sure there are others,” Reynders said, following comments from the French president, François Hollande, on Friday that the network was “more numerous than we thought”.

Two other men suspected of playing major roles have been on the run since November.

Mohamed Abrini, 31, a Belgian of Moroccan origin, disappeared after allegedly playing a key part in the planning and logistics of the attacks. A childhood friend of Abdeslam – their families used to be next-door neighbours in Molenbeek – was described on his international arrest warrant four months ago as “dangerous and probably armed”.

Abrini travelled by car with Salah Abdeslam and his brother Brahim – who blew himself up during the attacks – on 10-11 November when the trio made two round trips between Brussels and Paris to rent hideouts for the Paris attackers.

Abrini then travelled to Paris with the convoy of gunmen and bombers. In the days before the attacks, he was spotted on CCTV footage at a service station in northern France buying soft drinks in the company of Abdeslam and at the wheel of the rented black Clio that was later used in the attacks.

He disappeared the day before the gunmen and suicide-bombers attacked the French capital. It is uncertain whether he helped coordinate the attacks from a distance – his relatives have said he was in Brussels on the night of the attacks.

Abrini is thought to have given up training as a welder aged 18 and begun gravitating towards extremists. He was known to police for thefts and drug-related offences. In 2014, his younger brother Souleymane, 20, died in Syria while fighting in an Islamist militia headed by Abdelhamid Abaaoud, the ringleader of the Paris attacks who was killed in a police raid on 18 November.

In the year before the Paris attacks, Abrini had travelled to Istanbul and perhaps Syria, as well as to Birmingham in the UK, Germany and Morocco.

Police are also hunting for a key suspect known only under the alias Soufiane Kayal. The man presented false papers in the name of Soufiane Kayal when he was checked at the Austria-Hungary border on 9 September. He was travelling with Abdeslam and Mohamed Belkaïd, a 35-year-old Algerian who was shot dead on Tuesday during a police raid in Brussels. The three men had posed as tourists heading to Vienna on holiday and did not raise suspicions.

Belgian and French intelligence services have faced criticism for not keeping better tabs on the suspects before and after the attacks.

French media stressed that it was a public tip-off that ultimately helped police locate Abdeslam, just as it had been for the ringleader, Abaaoud. “The two principle fugitives from the 13 November attacks, Abaaoud and Abdeslam, would not have been located except for a gesture by citizens,” the French paper Le Monde said.

Le Monde and French public television reported that hours after Tuesday’s police raid on a flat in the Brussels suburb of Forest, an acquaintance of Abdeslam contacted the police saying Abdeslam had called him looking for a new place to hide. After phone-taps the police then traced him to the property in Molenbeek.

Belgian media reported that the police sensed they were on the right trail by the unusual number of pizzas ordered by a resident of the Molenbeek house.

“Abdeslam relied on a large network of friends and relatives that already existed for drug dealing and petty crime to keep him in hiding,” Belgium’s federal prosecutor, Frederic Van Leeuw, told Belgian public broadcaster RTBF. “This was about the solidarity of neighbours, families.”

Some of the ties in the network appear to have been forged during a youth of petty crime and drug violations, which the Abdeslam brothers abruptly abandoned to embrace extremism a few years before the Paris attacks.

In Brussels on Sunday, a major football match meant there was a heavy police presence with troops patrolling in camouflage armed with assault rifles. A lingering sense of tension meant shoppers fled for cover when rowdy fans set off fireworks.

But many in the city, from ordinary residents to the officials who run Molenbeek, are frustrated that there is not more support for integration, and monitoring young people who are at risk from radicalisation both through friends and online.

“Its all this new technology. I think the parents don’t know what their kids are up to,” said Amaechi Callisus, a Nigerian Belgian, picking up bread from a bakery a few doors down from Saleh’s hideout. “We need to do more to control the use of internet by innocent kids.”

Despite the reputation of neighbourhood, he said the arrest of Abdeslam at its heart came as a shock to him. “It was a surprise ... it wasn’t the same when I first came here in 1998.”

He said there needed to be more focus on integration, and language training for new arrivals. “You can’t get a job when you can’t communicate with your neighbours ... and if you are living in isolation, nobody knows you.”

The deputy mayor of Molenbeek, Sarah Turnie, was frustrated that Abdeslam had been captured in his home area rather than Forest, where he was hiding out until Tuesday, or other areas he had passed through.

“He doesn’t have support among the community of Molenbeek. What he certainly has is a group of friends, a network. That’s why he managed to [also] hide in the areas of Schaerbeek and Forest,” she told the French daily Libération.

There are fears that this will worsen Molenbeek’s reputation, and make it even harder for young people seeking to escape the unemployment that blights the neighbourhood, who are particularly vulnerable to extremist recruiters.