About "The Psychic Spy"


The Psychic Spy News Site is owned and operated by Glannant Ty Media.


Glannant Ty Publishing is pleased to announce that our very own Irene Allen-Block is currently in discussions to develop a dramatic television show based on her hit novel The Psychic Spy! We can’t say more at this time, but more information will be coming soon, so stay tuned! 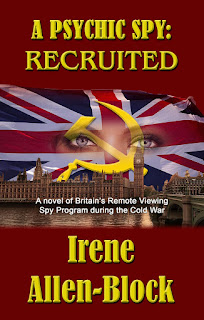 A Psychic Spy: Recruited tells the story of Eileen Evans, a beautiful young woman and talented psychic who is unwittingly recruited by MI6 to join their new top secret Remote Viewing program during the heart of the Cold War in the 1970’s and 80’s.  Eileen quickly finds herself embroiled in excitement and danger as she quickly becomes a “psychic spy” for British Intelligence.  Finding forbidden love with another agent, Eileen descends into a dark world filled with political intrigue, danger and death.  Not only must she cope with the possibility of losing her life, she must also struggle with the very real threat of losing her soul.

Smart, sexy and filled with humor and peril, A Psychic Spy: Recruited is a thrilling adventure that explores a little-known but very real world where governments use actual psychics to spy on their enemies, and in some cases, even their allies!  Using her own real-life experiences as a remote viewer, Irene Allen-Block has created a powerful tale that should entertain and educate readers on a piece of history that has been hidden in the shadows.

Nick Redfern, author of “The Real Men In Black”, says that A Psychic Spy: Recruited is “filled with adventure, intrigue and shadowy characters. As Irene Allen-Block skillfully shows, the mind is a mysterious and dangerous tool."
Look out James Bond, there’s a new spy in town who can see into the depths of your very soul!

Get your copy of The Psychic Spy on Amazon.com in both soft cover & Kindle formats,