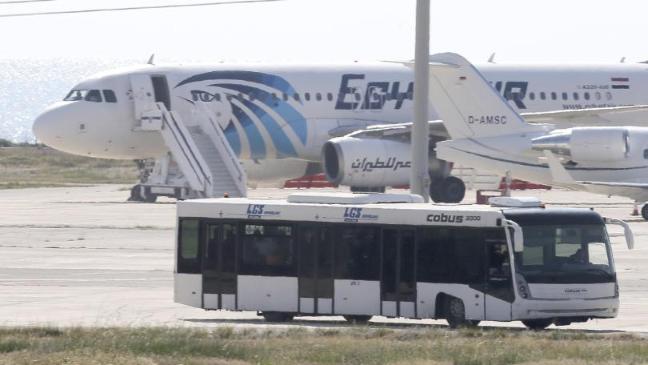 A man wearing a suicide belt has hijacked a passenger plane during a flight in Egypt and forced it to land in Cyprus, where a number of "foreigners" are being held hostage.

Unconfirmed reports say that a number of Britons and an Irish national were aboard the EgyptAir plane which was diverted during an internal flight from Alexandria on Egypt's Mediterranean coast to the capital Cairo.

The plane, which the airline said was carrying 81 passengers and crew, was taken over by a man armed with an explosive vest.

He has been named by Egyptian media as 27-year-old Ibrahim Samaha, which said that he wanted to claim asylum on the Mediterranean island.

Negotiations have led to the release of all the passengers, except for the crew and four foreign passengers, the airline said.

UPDATE: This is an early report and it is not yet confirmed that he is wearing a suicide belt it mat be something that looks like it. Also it is still not confirmed how many passengers remain on the plane. Further updates to come.