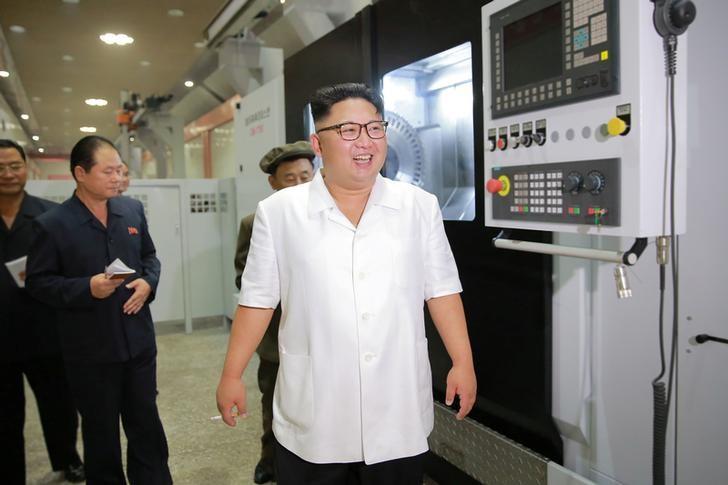 North Korea will have enough material for about 20 nuclear bombs by the end of this year, with ramped-up uranium enrichment facilities and an existing stockpile of plutonium, according to new assessments by weapons experts.
The North has evaded a decade of U.N. sanctions to develop the uranium enrichment process, enabling it to run an effectively self-sufficient nuclear program that is capable of producing around six nuclear bombs a year, they said.
The true nuclear capability of the isolated and secretive state is impossible to verify. But after Pyongyang conducted its fifth and most powerful nuclear test last week and, according to South Korea, was preparing for another, it appears to have no shortage of material to test with.
North Korea has an abundance of uranium reserves and has been working covertly for well over a decade on a project to enrich the material to weapons-grade level, the experts say.
That project, believed to have been expanded significantly, is likely the source of up to 150 kilograms (330 pounds) of highly enriched uranium a year, said Siegfried Hecker, a leading expert on the North's nuclear program.
That quantity is enough for roughly six nuclear bombs, Hecker, who toured the North's main Yongbyon nuclear facility in 2010, wrote in a report on the 38 North website of Johns Hopkins University in Washington published on Monday.
Added to an estimated 32- to 54 kilogram plutonium stockpile, the North will have sufficient fissile material for about 20 bombs by the end of 2016, Hecker said.
North Korea said its latest test proved it was capable of mounting a nuclear warhead on a medium-range ballistic missile, but its claims to be able to miniaturize a nuclear device have never been independently verified. [nL3N1BL1ND]
Assessments of the North's plutonium stockpile are generally consistent and believed to be accurate because experts and governments can estimate plutonium production levels from telltale signs of reactor operation in satellite imagery.
South Korean Defence Minister Han Min-koo this year estimated the North's plutonium stockpile at about 40 kilograms.
But Hecker, a former director of the U.S. Los Alamos National Laboratory, where nuclear weapons have been designed, has called North Korea's uranium enrichment program "their new nuclear wildcard," because Western experts do not know how advanced it is.
PAKISTAN CONNECTION
Jeffrey Lewis of the California-based Middlebury Institute of International Studies said North Korea had an unconstrained source of fissile material, both plutonium from the Yongbyon reactor and highly-enriched uranium from at least one and probably two sites.
"The primary constraint on its program is gone," Lewis said. Weapons-grade plutonium has to be extracted from spent fuel taken out of reactors and then reprocessed, and therefore would be limited in quantity. A uranium enrichment program greatly boosts production of material for weapons.
The known history of the uranium enrichment project dates to 2003, when the North was confronted by the United States with evidence of a clandestine program to build a facility to enrich uranium with the help of Pakistan.

Former Pakistani President Pervez Musharraf said in his memoirs that A.Q. Khan, the father of that country's nuclear program, transferred two dozen centrifuges to the North and some technical expertise around 1999.
"It was also clear that the suspected Pakistani connection had taken place, as the centrifuge design resembled Pakistan's P-2 centrifuge," Hecker said in a report in May.
Hecker reported being shown around a two-story building in the Yongbyon complex in November 2010 that a North Korean engineer said contained 2,000 centrifuges and a control room Hecker called "astonishingly modern."
By 2009, the North had likely acquired the technology to be able to expand the uranium project indigenously, Joshua Pollack, editor of the U.S.-based Nonproliferation Review, has said.
North Korea has not explicitly admitted to operating the centrifuges to produce weapons-enriched uranium, instead claiming they were intended to generate fuel for a light water reactor it was going to build.
Despite sanctions, by now North Korea is probably largely self-sufficient in operating its nuclear program, although it may still struggle to produce some material and items, Lewis said.
"While we saw this work in Iran, over time countries can adjust to sanctions," he said.