Edward Snowden: Why Obama should pardon me 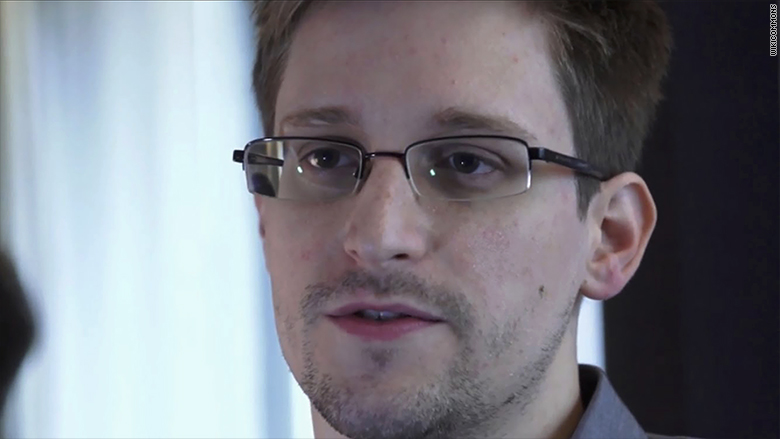 The world famous whistle-blower is making his case for a presidential pardon, saying his decision to leak a trove of highly classified National Security Agency documents helped bring about much needed change.
"If not for these disclosures, if not for these revelations, we would be worse off," Snowden told The Guardian journalist Ewen MacAskill in a video interview published Tuesday.
Snowden now lives in Russia, where he fled after sharing with MacAskill and other journalists a vast database of documents that revealed the scope of the NSA's surveillance efforts in the United States and abroad.
Asked about the prospect of a presidential pardon, Snowden said the legal process -- most often used by U.S. presidents as they leave office -- was appropriate in his case.
Yes, there are laws on the books that say one thing, but perhaps this is why the pardon power exists -- for the exceptions, for the things that may seem unlawful in letters on a page but when we look at them morally, when we look at them ethically, and when we look at the results, it seems obvious that these were necessary things," he said.
The timing of Snowden's interview with The Guardian appears to be timed to coincide with the release of "Snowden," an Oliver Stone biopic about the former NSA contractor's exploits.
Prominent advocacy groups Amnesty International and the ACLU are also poised to launch a campaign asking for Obama to grant Snowden a pardon. The organizations have scheduled a press conference for Wednesday and established a website for their campaign.
Snowden has been charged with violating the United States Espionage Act. He has said consistently that he would be willing to return home if he could face a fair trial.
The leak prompted significant changes in Washington, including the passage of legislation that revoked the NSA's authority to collect the phone records of millions of Americans.
Snowden's case for a pardon may not be entirely hopeless. Former U.S. Attorney General Eric Holder told CNN in May that while Snowden should still face trial, he had performed a "public service" by triggering a debate over surveillance techniques.
At the White House, though, there has been little in the way of conciliatory gestures. Spokesman Josh Earnest addressed the prospect of a pardon on Monday, saying that President Obama's position had not changed.

"Mr. Snowden has been charged with serious crimes, and it's the policy of the administration that Mr. Snowden should return to the United States and face those charges," Earnest said.
"The fact is the manner in which Mr. Snowden chose to disclose this information damaged the United States, harmed our national security, and put the American people at greater risk," he added.