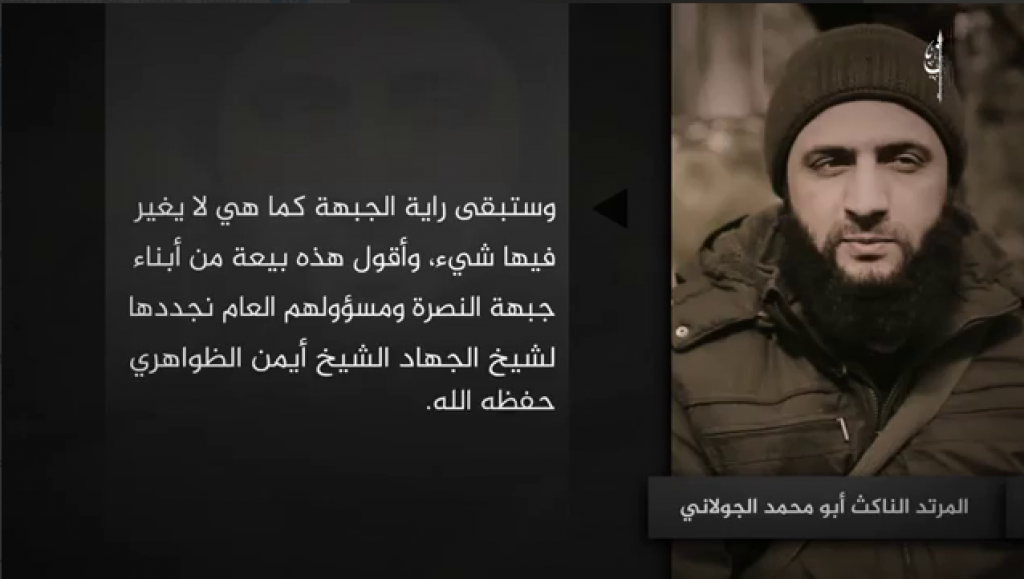 The Islamic State’s so-called province in Damascus released a video on Apr. 11 that is intended to undermine the ideological legitimacy of the group’s rivals, including al Qaeda and Hay’at Tahrir al Sham (HTS).
The 18-minute plus production, titled “So Will They Not Repent to Allah,” opens with footage of Bashar al-Assad’s regime dropping explosives and victims’ bodies being pulled from leveled buildings. It quickly moves to a brief and self-serving history of the jihad in Syria, lauding Al Nusrah Front for its early role in the war. At the time, prior to early 2013, Al Nusrah was an arm of Abu Bakr al Baghdadi’s Islamic State of Iraq (ISI). And Al Nusrah’s leader, Abu Muhammad al Julani, was Baghdadi’s subordinate.
A narrator blasts Al Nusrah for supposedly choosing “a new path” by disobeying Baghdadi and swearing fealty to al Qaeda leader Ayman al Zawahiri (seen below). A masked jihadist claims that Al Nusrah then switched from fighting Assad’s regime and its allies to operating against the “pious,” meaning the Islamic State’s loyalists. This undermined the mujahideen’s efforts to rule according to sharia, he says. In addition, Julani is labeled a “traitor” for his betrayal of Baghdadi. 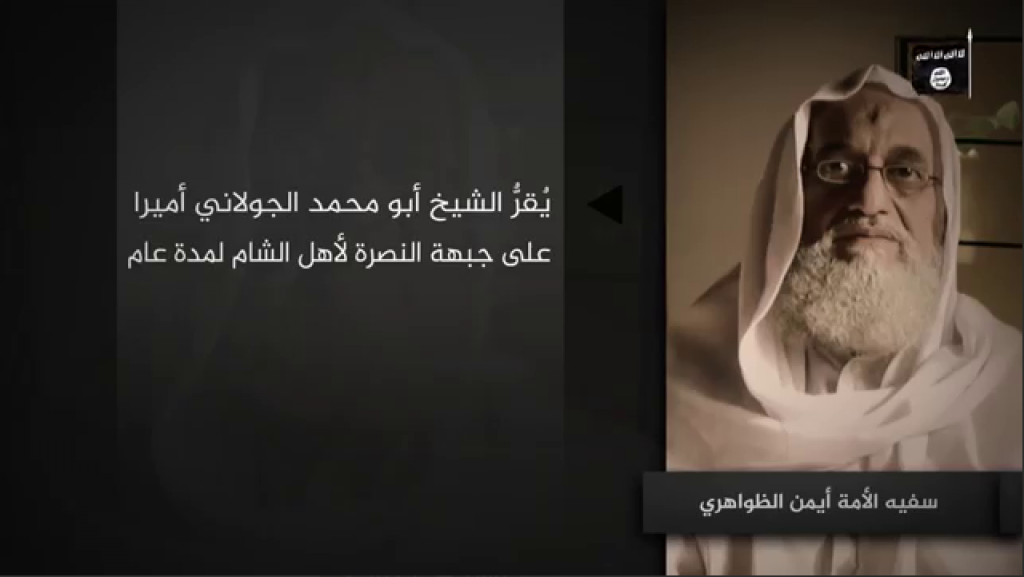 Although the video has some truth in it, it offers a selective interpretation of history. Significant evidence shows that Baghdadi’s ISI was a part of al Qaeda’s global network, despite management problems and disagreements. The ISI adhered to many of al Qaeda’s directives, including abstaining from attacks inside Iran, and al Qaeda’s senior leaders addressed Baghdadi, as well as his predecessors, as their lieutenants.
In addition, Al Nusrah did not stop targeting the Assad regime after breaking from Baghdadi, as the Islamic State’s propagandists argue. Indeed, Al Nusrah led the Jaysh al Fateh alliance that swept through Idlib province in 2015, clearing out many of Assad’s strongholds in the process. And Al Nusrah’s men continued to fight Assad’s forces thereafter, including after the group was relaunched as HTS in Jan. 2017.
HTS itself regularly accuses the Islamic State of focusing its operations on rival Sunni jihadists and Islamists, rather than the Syrian regime, even comparing Baghdadi to Assad himself. So the Islamic State’s video is an attempt to return the charge. (In reality, both HTS and the Islamic State regularly clash with Assad’s armed forces and their irregular, Iranian-backed allies.)
The Damascus “province” eagerly trumpets HTS’s allegedly heavy “losses” at the hands of the regime, while also advertising its own operations against Assad’s fighters. A number of grisly scenes depict Islamic State snipers and assassins killing Assad’s men. The Islamic State’s propagandists portray the group as the key opponent to the Syrian government, pointing to areas in and around Damascus where other groups have ceded ground. Some of the footage was recorded in the Qadam neighborhood of Damascus, where Baghdadi’s jihadists continued to fight even after others were vanquished. 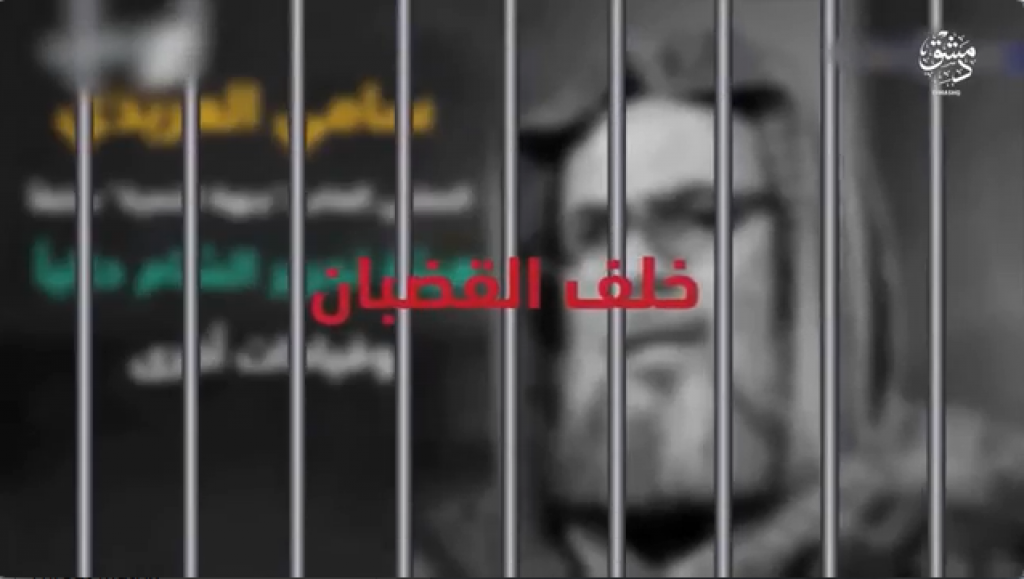 The video’s narrator and masked witness tick off other problems HTS has encountered, highlighting the group’s decision to detain al Qaeda loyalists such as Sami al-Uraydi, a Jordanian ideologue who has been one of Julani’s staunchest critics. One image, seen above, depicts Uraydi behind bars. Uraydi was released by HTS, but only after veteran jihadis formed a mediation council and interceded. The Islamic State also criticizes Julani’s and HTS’s alliances with “apostate” rebel groups inside Syria and Al Nusrah’s decision to rebrand itself more than once. Baghdadi’s loyalists take aim at other jihadi personalities in Syria, including Sheikh Abdullah Muhammad al Muhaysini, as well.
All of this is intended to convince HTS members to defect to Baghdadi’s cause. The masked Islamic State member calls on HTS jihadists to leave their group, “repent” and “turn to Allah.”
The Damascus province’s video followed an article in the Islamic State’s weekly An Naba magazine that was critical of al Qaeda. In the 126th issue of An Naba, released earlier this month, the Islamic State accused al Qaeda’s leaders of of placing “the safety of their organization over the safety of religion.”
There has been some speculation that the Islamic State may be willing to rejoin al Qaeda now that it has lost most of the territory it once controlled. However, the organization’s recent propaganda efforts demonstrate that it retains its animosity for al Qaeda and HTS. Some Islamic State figures and factions may be tempted by al Qaeda’s reconciliation efforts and rejoin their former brethren. The competition between the Islamic State and al Qaeda may vary from one jihadi theater to the next, and the situation could also evolve over time. But the mother group continues to produce messages that are intended to weaken its jihadist rivals.