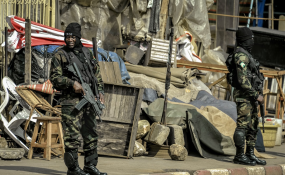 There was heavy military activity in the English-speaking regions of Cameroon on the night of February 3.
Fifty armoured vehicles and assault weapons were deployed by the government in the English-speaking regions - specifically Bole in the Southwest, Africa Info learned from a trustworthy source.
The witness said Belo is on the verge of genocide as Beti soldiers from Yaoundé are "killing people like chickens". The witness also said heavy artillery fire is being reported in Bamenda (the capital of the North West region).
According to humanitarian sources, in Batibo in the Northwest region, soldiers are ransacking the property of unarmed civilians, forcing them to seek refuge in the forests.
The unrest started in November 2016 when the English speaking region of the country began protesting against what they term marginalization by
Francophone dominated regime. The regime in place have ignored national and international calls for a comprehensive dialogue to address the root cause of the crisis. Rather it has opted for a military response that has seen hundred of deaths and casualties on both side with thousands crossing into neighboring Nigeria as refugees.