Britain’s main threats are from Russia and jihadi terrorists – our defence policy should reflect that. 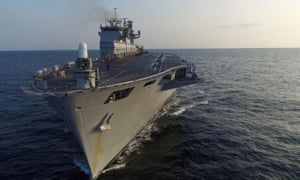 HMS Ocean is at risk from defence spending cuts.

Since 2015, British defence and security policy has been defined by two words: “global reach”. Britain, said the national security strategy hastily written by the incoming Tory government, should have the ability to zap any location on the planet. Now, as the government trawls through the defence budget to try to find ways to plug a £20bn hole, the entire concept is being held up to ridicule. It is our already depleted navy that’s getting zapped.

Two Royal Navy amphibious landing ships – HMS Bulwark and HMS Albion – are being considered for the chop, together with 28 brand-new Wildcat helicopters, designed for warfare against ships and submarines. Other options include cutting 1,000 soldiers from the Royal Marines, on top of 200 lost already, and scrapping the helicopter ship HMS Ocean.

The move has prompted outrage in south-west England, where much of the Royal Navy is based and was, it emerged last week, the trigger for the resignation of the commander of the UK’s maritime forces. Predictably, even backbench Tories are now agitating to save this or that favoured segment of the military. What is needed is something much more radical: to scrap the policy of “global reach” and start afresh.

The strategic defence review and the accompanying strategy statement were hailed in 2015 as a triumph of process. Guided by the cabinet’s two least inspiring figures – Philip Hammond as foreign secretary and Michael Fallon at the Ministry of Defence – Britain managed to re-commit itself to a vast military presence east of the Suez canal without anybody in parliament seeming to notice.

On top of that, it had begun the conversion of the two army units into “strike brigades”, designed to invade other countries by land or sea. And it had committed the UK to both replacing the Trident missile submarines and deploying both of the new aircraft carriers commissioned under Gordon Brown. The only thing missing amid the flurry of maps and organograms, was a clear understanding of the evolving threats to Britain.

These, as we now understand, are the jihadi terrorism of Islamic State and the hybrid warfare being waged against all western democracies by Vladimir Putin. Even in 2015 it was clear that the major and strategic threat to the global order came from unilateral actions by Moscow. Crimea had been annexed, Ukraine for all practical purposes partitioned and the mass murder of passengers on MH17 traced to Russian backed and armed rebels. Yet the security strategy busied itself with trade issues, the aid budget, a vanity naval base in Bahrain and training missions to Malaysia and Singapore.

At the core of the strategy was the protection of a “rules-based international order and its institutions”. But since 2015, two rather big holes have appeared in that rules-based order. First, British voters decided to break up one of its vital institutions, the EU; then the Kremlin manipulated the US electoral system so effectively that a man under investigation for links with Russian intelligence is now commander-in-chief of the US military.

The rules-based order is in disarray; the UK’s place in it uncertain – and the UK’s military capabilities are being slashed piecemeal to the diktats of an austerity budget that does not make sense. As to the foreign secretary – the person nominally in charge of handling these problems – it does not seem likely that he will be around long enough to apply his mind to them.

The whole situation calls for a rethink and it looks, incredibly, as if Labour is better equipped to lead it.

Theresa May offered, in her Florence speech, a new security treaty between Britain and the EU. But she did not say what would be in it. They know what is not in it: the Tories have ruled out any participation in the EU armed forces, or EU foreign and security policy after Brexit. Yet Europe has to be the main security focus of the UK for the foreseeable future for two linked reasons. First, because Europe is where Islamist terror cells have been planning operations against British citizens, both here and abroad. Second, because Putin’s strategic aim is to disrupt Europe, rendering it “multipolar” – with some states and many opposition parties polarised towards Moscow’s interests. The mini-review going on behind closed doors in Whitehall should be halted and brought out into the open. The ships and naval helicopters being earmarked for the chop are vital components of the conventional deterrent Britain is committed to providing via Nato in the Baltic. Instead of another round of piecemeal cuts, the government has to decide how the forces and equipment specified in 2015 are supposed to work amid the new global and regional insecurity.

There is a big opportunity here for Labour. Having buried the issue of Trident renewal, it could bury concerns about its commitment to national security with a clear commitment to stop and reverse defence cuts.

The changed pattern of terrorist attacks in the summer has prompted a scramble to centralise intelligence resources and rethink counter-terror tactics. That’s good. But ask “What are we doing about Putin’s attempt to dismember Europe?” and the most honest answer you’ll get is: helping him.
Between 2011 and 2015, the Tories implemented real defence spending cuts totalling 13%. Even if the government meets in full its obligation to spend 2% of GDP on defence, with GDP growing slowly and sterling depressed against the dollar, that is already delivering fewer resources than intended.

Nobody can predict how threats to the UK will evolve. But when you see Spain wracked with civil unrest and some parts of Germany voting 20%-plus for the far-right, it is rational to believe those threats will evolve in Europe. All we can ask of the military technocrats is that they design forces and commission equipment flexible enough to meet the evolving challenge.

What we can ask of government is strategic clarity and money. But there is none.